Disclosure: Part of the itinerary was organised by VisitScotland. Train, car rental, first 3 hotel nights and gondola/ski passes were complimentary. The rest (including other accommodation, activities, all meals and petrol) we paid for. All opinions are our own.

The three of us love Scotland (five visits and counting) and the snow - whilst Maman and I are more about walking and just playing in the snow (and taking photos, of course), Papa loves to snowboard.

Following our first visit to Scotland together in Summer 2015 (after spotting the ski lifts whilst driving through the Cairngorms), Maman realised that there were ski resorts there (I know right, surprising!) - and when Maman has something in mind...

So we were delighted when VisitScotland offered us the oppawtunity to try Nevis Range (one of Scotland's five snowsports resorts) in the Western Scottish Highlands and stay in a nearby castle hotel in February 2018. 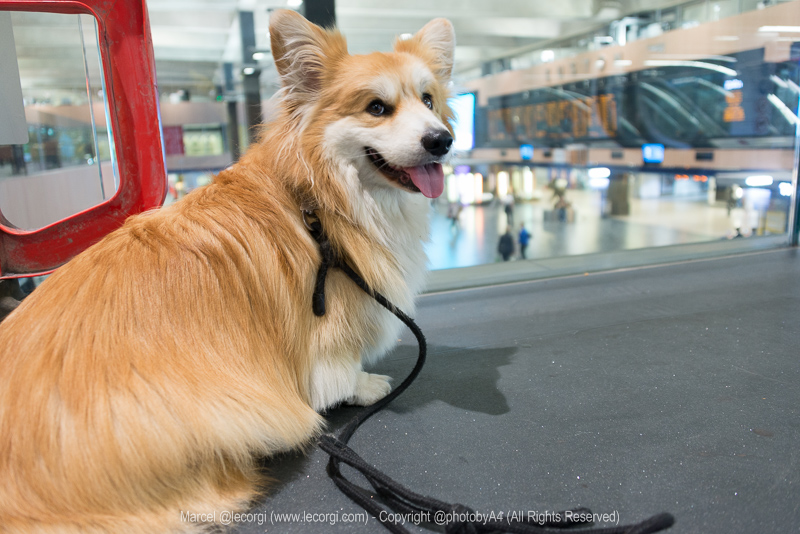 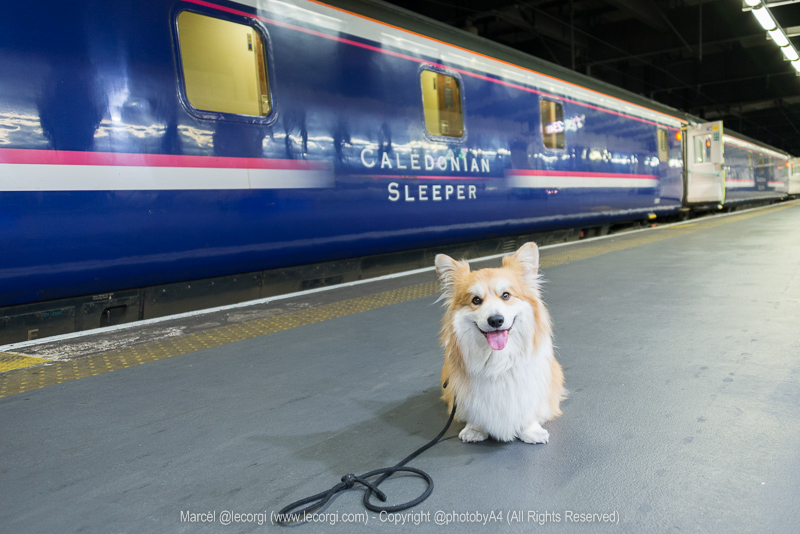 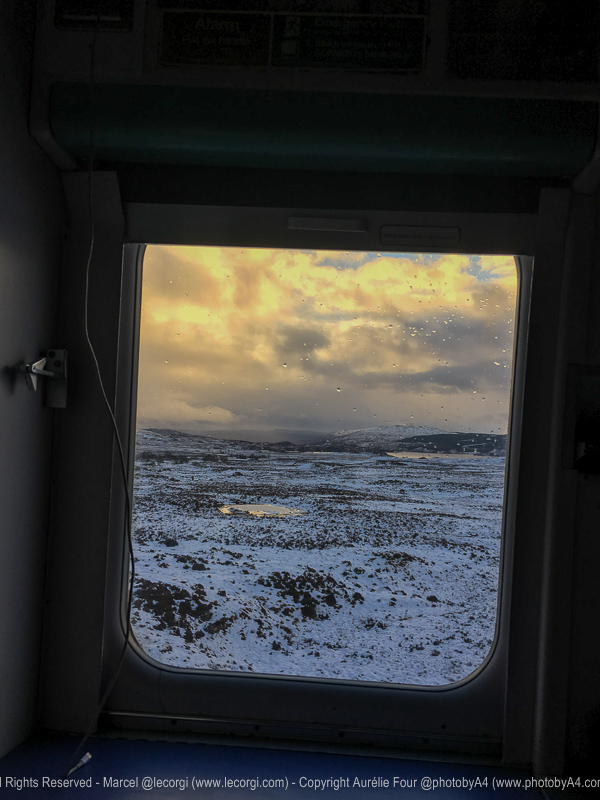 For the 3rd time in less than a year we opted for the night train, the Caledonian Sleeper, in a private berth cabin (the other option with a dog being a reclining seat). This is a great (and dog-friendly) way to travel to many parts of Scotland without having to drive all the way up from London.

We've previously used it to travel to/from Edinburgh and Aberdeen, and this time headed to Fort William, waking up to stunning snowy scenes reminiscent of Narnia. The night train also goes to Glasgow and Inverness, and all depart from London Euston station and brand new state-of-the-art trains are to be introduced in 2019. (more thorough review to follow). 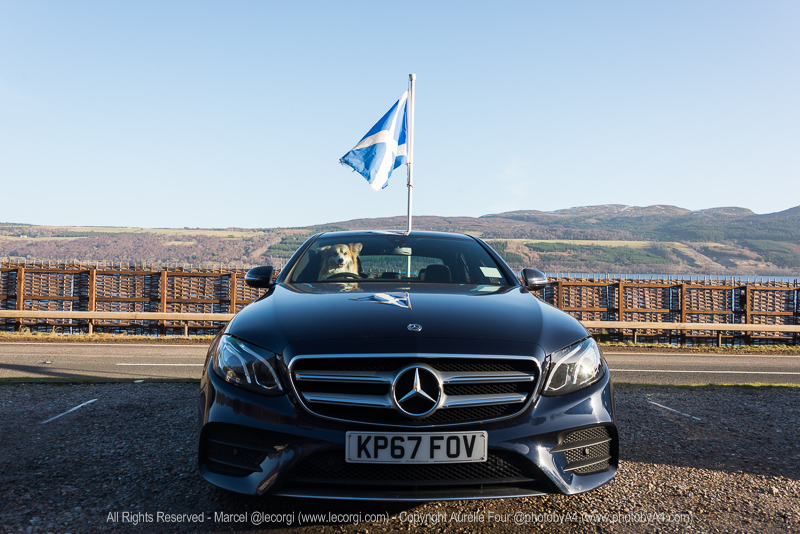 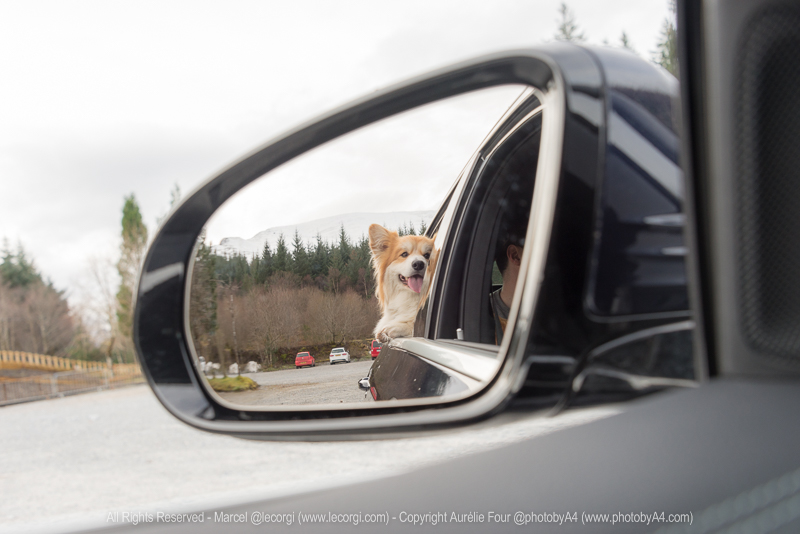 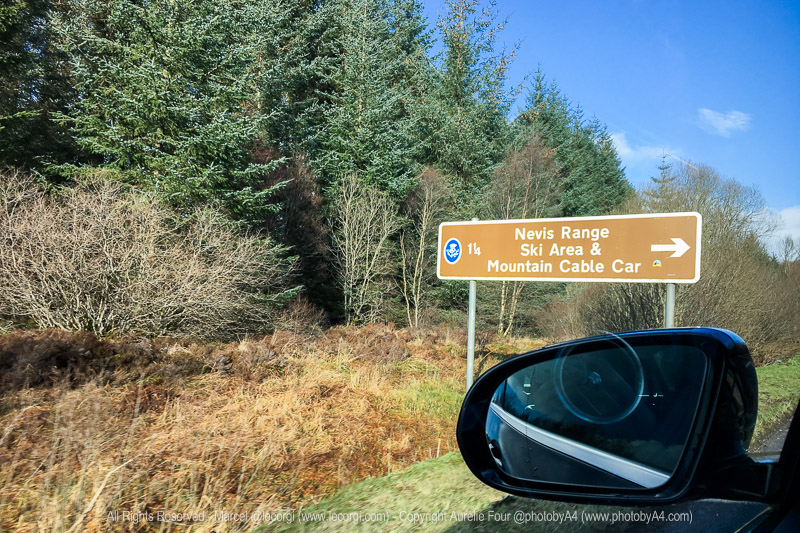 Whilst there are trains and public transports available throughout Scotland, most dog friendly, getting around with a car is much easier, especially for those like us who love remote locations, and some impromptu adventures.

Once arrived, we took a pre-booked taxi to the hotel, where the Hertz UK team later came to deliver our car for the stay as the company's closest office was in Inverness (this option usually costs extra). Click HERE to read more about our car rental experience during the stay.

Nevis Range Mountain Resort is only a few minutes drive away from the castle and Fort William - offering ample and free parking. It boats a total of 32 runs, 11 lifts and Britian's only mountain gondola, which happens to be dog friendly all year around.

The resort can also be access by taxi or using the 512 Shiel (N41) bus, which regularly goes from Fort William Town Centre to Nevis Range (we could not confirm whether the buses allow dogs or not, some taxis do).

At the base of the gondola (which is Britain's only mountain gondola), by the parking, there is a ski rental shop as well as a restaurant. Dogs can go in the ski shop but are only allowed in the lobby of the restaurant (there's a bowl of water there for us, and bench for humans).

The gondola itself is dog-friendly all year round, with no size restriction - something we'd never heard before and that did get us very excited! It is advised to keep dogs on lead at all times, especially near the skiers.

For those dogs that find the system overwhelming (turnstiles and getting up the moving cabins) we highly recommend being carried to get in. Each cabin can accommodate up to 6 people and the journey takes 12-15 min each way, with breathtaking views across the area (including lochs and glens) to enjoy.

NB: The gondola unlike its name indicates does not go up Ben Nevis itself but up 650m to Aonach Mor which is where the slopes end (there is no skiing down to the base station of the Gondola, but in the Summer there are trails used by bikes to go all the way down).

Once out of the gondola (carrying pups out is recommended to get out to avoid accidents) there are 11 ski lifts and 32 runs for those like Papa who enjoy some snowboarding or skiing (when there is enough snow - the low altitude means it is not always the case but there are plenty other activities should this happens). We recommend checking which runs are open before setting off to ski every day.

When not "teaching" Papa how to snowboard (watch out for other skiiers and do keep dogs on lead if they are prone to wandering, this could be very dangerous for pup and people) or playing near (but not on) the slopes, there are two mountain viewpoint trails (waterproof / snow boots recommended for humans) to walk and admire the view for those who prefer to walk or play in the snow, with or without canines.

Also at the top of the gondola, the Snowgoose restaurant and bar is not dog friendly. This is due to "hygiene reasons", possibly because the cafeteria type setting means the kitchens are open - although we're not sure how much more clean wet and muddy snowshoes with melting snow are than paws (and we did spot a dog or two getting in anyway). This can become an issue when traveling alone with a dog, especially when the temperatures are cold outside and the weather inclement. Maman and Papa do not leave me alone tied outside of restaurants or shops - so they took turns to buy hot drinks and we stayed on the terrace when not out and about (it is open to the elements but offers stunning views especially at sunset).

The bathrooms in the restaurant building are accessible with a pooch if needed.

Once done with the walking and playing, Maman and I would go down to the base and warmer temperatures and go visit somewhere nearby whilst Papa was on the slopes, or go to the hotel have a nap. 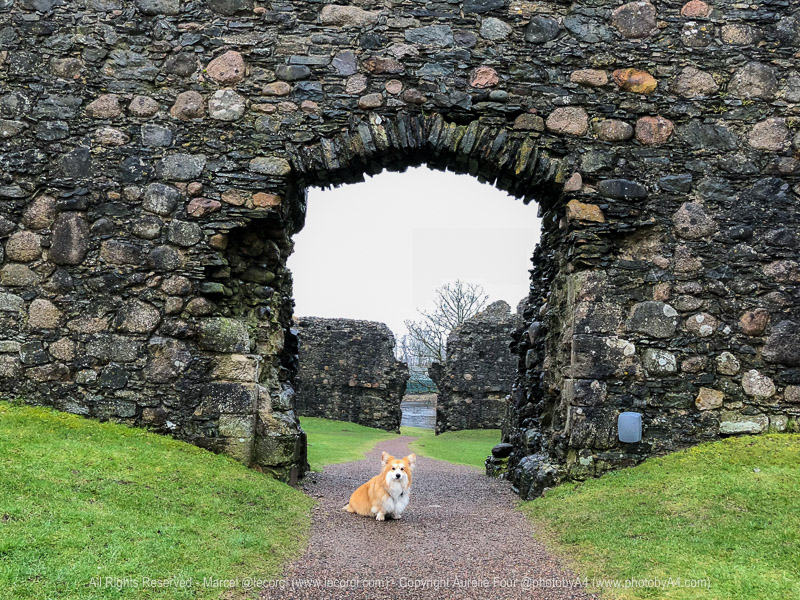 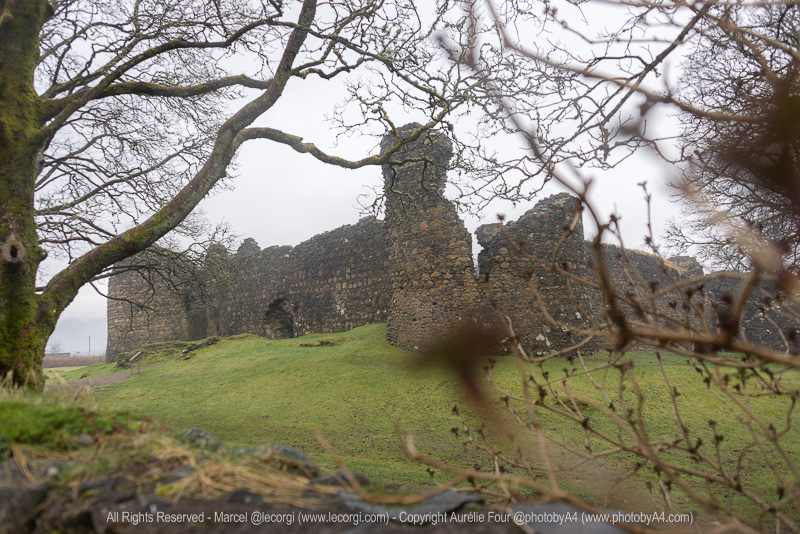 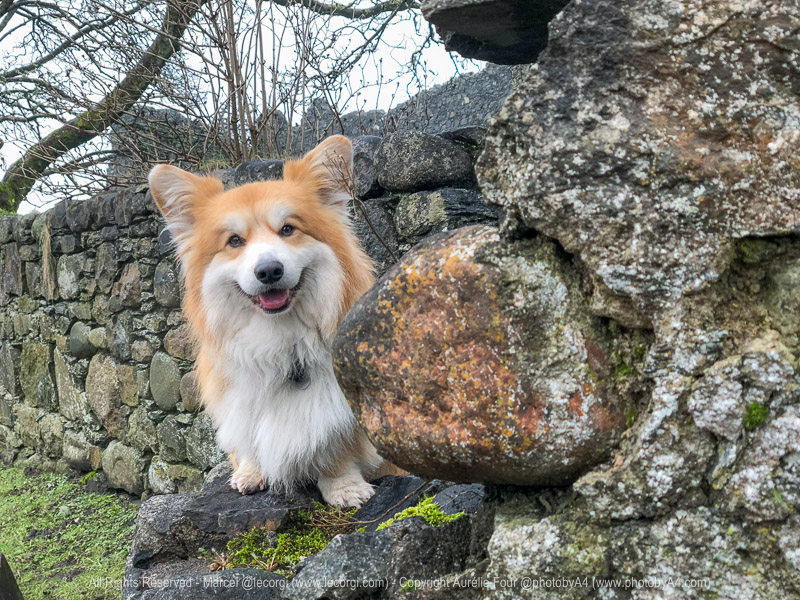 It does not take long to go around what is left of a magnificent 13th century castle (just a few ruins on the banks of the river Lochy, where the Inverlochy battles took place) but is definitely worth the stop. We highly recommend doing some research beforehand on the history of the castle as very little information is available on the spot! The visit is free and completely outdoors.

You won't be able to visit the distillery (inside at least) with a dog but Maman and I were allowed in the café for a wee dram and had a look around the grounds (we could not confirm whether this was an exception or not). There are farm animals around the property and in the nearby fields - including some Highland coo (that decided to stop hiding when we were rushing for our train back to London, or course).

Also known as the "Harry Potter bridge" (as it features in the films), the majestic viaduct carries the dog-friendly Jacobite steam train - which runs in the Summer months from Fort William to Mallaig (as well as on some dates the rest of the year) and doubles as the "Hogwarts Express". The viaduct runs across a 1,000 ft span, 100 ft above the ground.This was our second visit to the Viaduct, our first was in June 2015 (when the train was running).

Whilst an exception was made for me on the spot, we since found out that only assistance dogs are allowed inside Glenfinnan Monument & Visitor Centre. Dogs are allowed in the grounds, kept on lead.

A hike to see the viaduct from above (and capture the steam train passing by when it is) is a must (please do respect nature though and keep to the existing trails) - the scenery is stunning, in Summer or Winter! Click for more info.

WARNING: if going up, stay clear of the tracks, trespassing there and anywhere on an active train line is very dangerous! 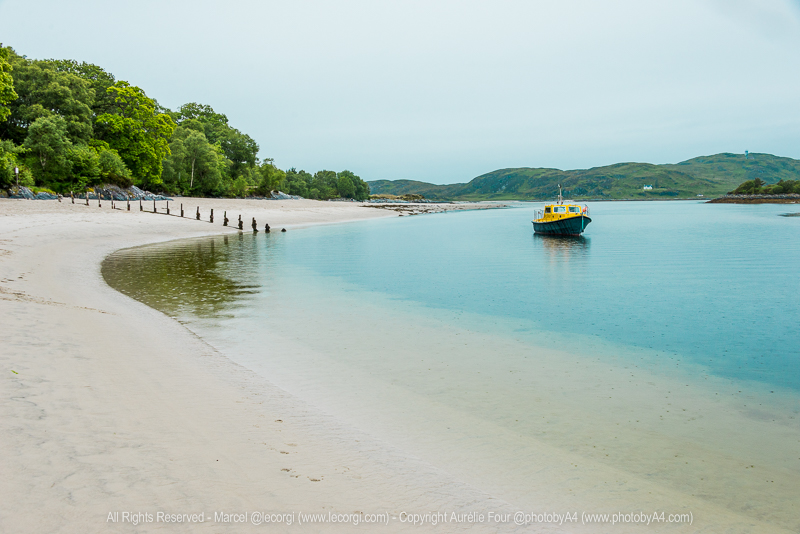 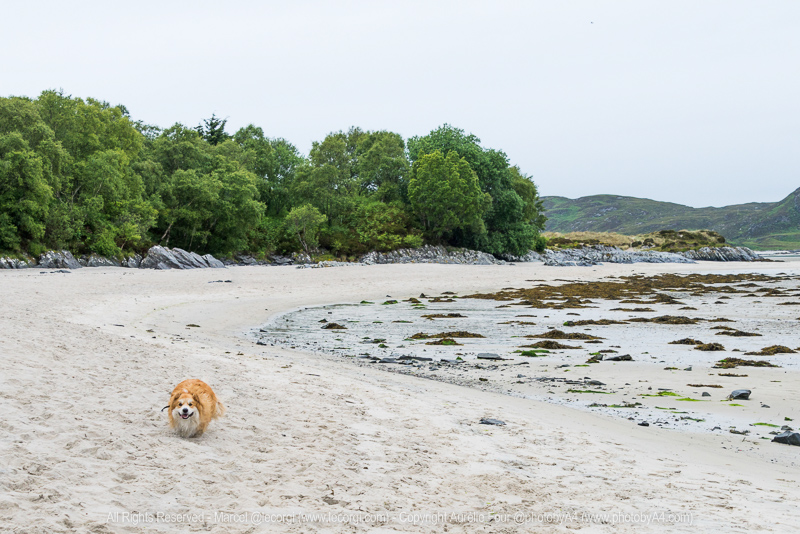 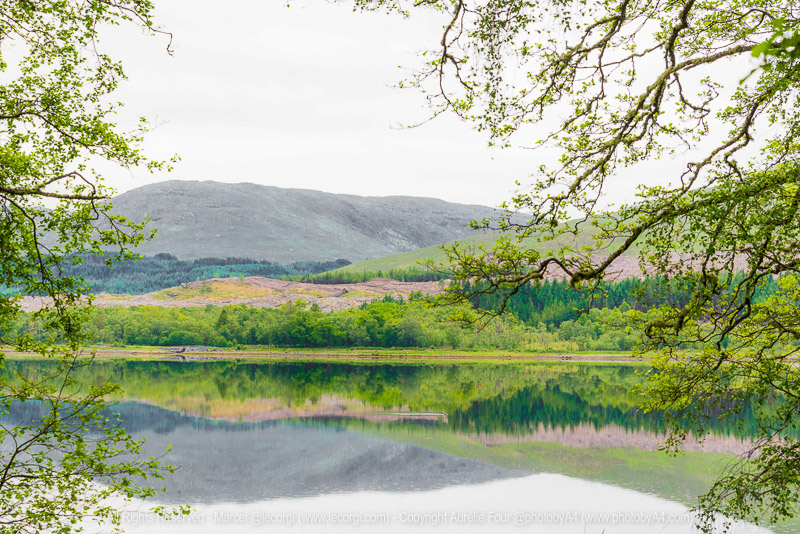 A stunning and quiet string of rock-framed, white sandy beaches with turquoise waters and spectacular views out to the Small Isles of Rum, Eigg, Muck and Canna. Not much traffic to worry about on the way to the beach but it's a challenge to keep away from admiring the scenery whilst driving. NB: we visited ithe beach in Summer 2015, not during the Winter.

Only 4 miles away from Fort William Centre and 3.5 miles from the Nevis Range mountain resort, Inverlochy Castle Hotel is an award-winning luxury hotel and restaurant situated in a castle built in 1863 . It is surrounded by evergreen trees and the nearby loch, set amongst the beautiful Scottish West Highlands scenery. Leisure activities at Inverlochy include fishing, tennis and clay pigeon shooting, as well as scenic walks and a giant outdoors game of chess. Free WIFI internet access and free parking are available.

The staff was wonderful and ever so helpful - in reception, always on hand to help and welcome us (and give myself a fuss), and the property looked stunning.

The individually designed rooms are spacious, comfortable, and feature sumptuous decor and striking views. They are equipped with a TV, CD player, private bathroom and stunning views. A DVD player and Play Station 2 are available on request.

Dogs can stay at Inverlochy Castle Hotel on request, at no extra charge. We were provided with a comfortable dog bed, two bowls and even a menu for dogs in the room. Canines are however only allowed in the rooms (where owners are advised not to leave them alone, making it difficult to have dinner on site and breakfast anywhere else than in the room) and can only go through reception to get to the rooms. With nowhere else within easy reach to have dinner, this could be problematic for those without a car especially.

There are plenty of lovely walks available nearby, including around the castle - however loads of sheep (watch out for those with a herding instinct) and we could not find any refuse bin to put away poo bags.

For these reasons, whilst we had a wonderful stay (I adapt easily and can stay on my own without a problem so did end up staying alone in the room - others we heard ended leaving their dogs in their car during meals) we'd say the hotel tolerates dogs rather than welcomes them at the moment.

The work of legendary father and son duo Albert and Michel Roux Jr - the restaurant has been awarded AA 3 Red Rosettes. It offers a culinary experience, modern British cuisine with French influences, using local produce. Light lunch and afternoon tea are served in the lounge, dinner in the restaurant. The dress code for gentlemen for dinner in the restaurant is a jacket (reception has some on had for those who like Papa do not travel with one). Papa and Maman opted for the Tasting Menu with wine pairing on both evenings and absolutely loved it.

The breakfast was equally delicious, Maman particularly recommends the Porridge Brûlée with Ben Nevis Whisky and Cream (which she had on all three mornings).

Until we visit again, Scotland!

Disclosure: Part of the itinerary was organised by VisitScotland. Train, car rental, first 3 hotel nights and gondola/ski passes were complimentary. The rest (including other accommodation, activities, all meals and petrol) we paid for. All opinions are our own.